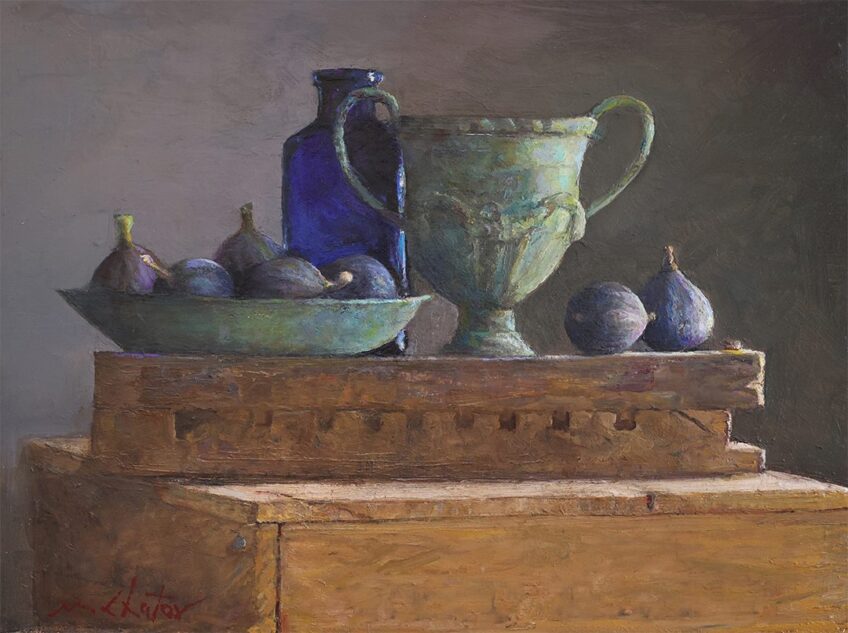 Above: Quiet Melody by Marc Chatov

Materials: A supply list will be mailed after registration. Attendees will need to bring a plein air or portable easel. If you’re traveling from out of town, an easel may be provided. Contact Laura Murphey with any questions at (678) 642-9858.

Successful paintings–whether still life, figurative, landscapes, or portraits–all have a cohesive structure of color, chroma, value, and composition that works together.  In this workshop Marc will focus on still life.

Born in Key West Florida in 1953, Marc grew up in a family of artists, musicians and stage professionals and began his career in fine art painting at age 18. His mother, Geneva, was a dancer and Powers Girl model in New York, and his father, Roman, was Russian-born and a classically trained muralist, figurative painter and prominent portrait artist. In 1958, Marc’s family moved to Atlanta, Georgia, where his father and uncle, Constantin Chatov (also a portrait painter and trained concert pianist), founded the Chatov Studio. Growing up amid the rich culture of his family’s art atelier, Marc was exposed to the academic principles of art and to professionals in the art world, witnessing from an early age how they translated the world onto canvas. When he wasn’t drawing pictures for his own enjoyment, he was typically found sitting for his father Roman, whose passion for painting was all consuming. As a teenager, Marc studied painting under the tutelage of both his father and uncle at the Chatov Studio.

Marc attended Georgia State University as a fine art major where he studied drawing under the late James Sitton who was acclaimed for his drawing and art anatomy instruction. Marc also studied at the Art Students League of New York under Michael Burban and Nelson Shanks. A devout romantic with a passion for traditional realism and the academic principles of fine art painting, Marc began an intense, full-time apprenticeship with his father and uncle in his early twenties. 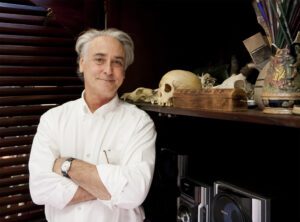 Throughout his life, Marc has been an avid student of art history and has adopted the philosophy of American painter Robert Henri, who wrote, “The object isn’t to make art, it is to be in that wonderful state which makes art inevitable.” Marc found great inspiration from his constant exposure to art at home and during his international travels where he studied and observed the works of historical masters including Velázquez, Repin, Manet and Sargent. From these creative influences, Marc achieved his distinctive style and mastery of brush and pigment that make him renowned in his field.

Today, Marc is regarded as a leading contemporary portrait painter.  He has been featured as one of the top eight portrait artists in America in Money magazine and is represented by Portraits, Inc.  Marc has been featured in American Art Collector, Fine Art Connoisseur, International Artist, and The Artist’s Magazine.  He has won numerous awards including the Governor’s Artist of Excellence Award and most recently, BEST IN SHOW, for his painting “Braids,” at the 2017 Best of America National Juried Exhibition Sponsored by the National Oil and Acrylic Painters Society.

Marc is a member of, and exhibits with, National Art Organizations including the Salmagundi Club of New York, Oil Painters of America, American Impressionist Society and Portrait Society of America.  Additionally, he is an Advisory Board Member with the Portrait Society of Atlanta.  His work hangs in public and private collections in the United States, Mexico and abroad including the Georgia State Capital, Emory Hospital, University of Georgia, University of Southern California Thornton School of Music, the Lovett School, and The Westminster Schools.

Marc is also a well-known and popular instructor. He honed his teaching skills as an assistant to Roman and Constantin in the Chatov Studio and gradually took over their classes in 1984. Today it stands as the longest running art atelier in Atlanta. Despite his busy portrait schedule and being in demand for gallery easel works, Marc regularly conducts classes, workshops and lectures. He cherishes the opportunity to work with fellow artists—as much as Marc imparts on them, his pupils also keep him thinking and growing.

Marc’s students, collectors and viewers are most impressed with the exquisite colors and brushwork that makes his portraits and easel works so distinctive. The luminous skin tones and palpable textures that characterize his paintings are reinforced by his strong knowledge of drawing and anatomy, but it is his ability to capture the spirit of his subject, an ineffable humanity rendered in paint, which moves the viewer. Recalling the wisdom imparted to him by his father, Marc often quotes Roman’s favorite truism, “In art, first one becomes a master, then an artist, and finally, a student.”

In 2014, the book “Chatov” was written by Morton Publishing.  The book outlines the contributions of numerous members of the Chatov family, including Marc’s undeniable influence on a generation of artists and his gifts to the world of art.

Workshop Questions: If you have questions, please email info@portraitsocietyofatlanta.org or call Laura Murphey at (678) 642-9858.  If you encounter a technical issue with registration please call 404 290-8086.

If you need advice on nearby hotel accommodations, please email info@portraitsocietyofatlanta.org

(The workshop supply list will be emailed after registration is completed.)