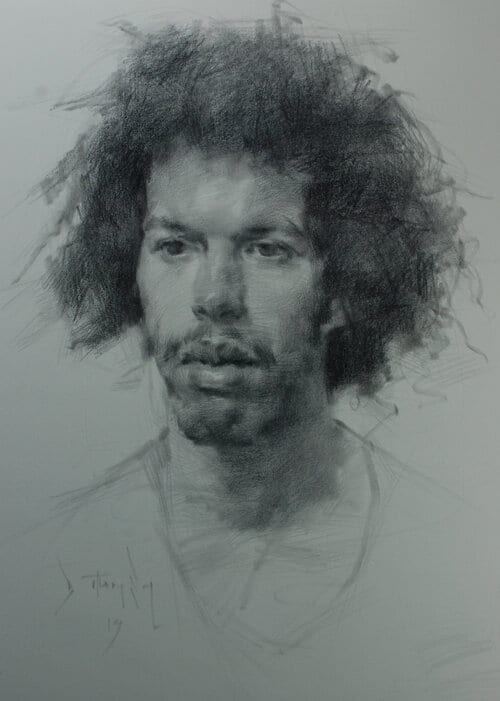 This Zoom 3 day workshop will be conducted May 24 – 26, 2021, 10 am – 5 pm. Full participation with critiques and interaction online is limited to 25 students and is $425 for PSA members and $450 for non-PSA members. There will be an option for audit only.  Here students can attend class without direct interaction with Dan, but may ask questions via chat and their portraits will not be critiqued, but they may observe the critiques of the full attendees. The cost for audit only is $250 for PSA members and $275 for non-PSA members.

Dan Thompson was born in Alexandria, Virginia, and graduated from the Corcoran School of Art in Washington, DC.  He earned his MFA from the Graduate School of Figurative Art of the New York Academy of Art, and supplemented his training with several additional years of private study and studio apprenticeships along the east coast of the United States.

He has been awarded two grants from the Elizabeth Greenshields Foundation and has twice received the Ethel Lorraine Bernstein Memorial Award for Excellence in Painting from the Corcoran College of Art and Design.  In 2001, Thompson won Best of Show in the American Society of Portrait Artist’s International Portrait Competition at the Metropolitan Museum of Art in New York.

Since 2002 Mr. Thompson has demonstrated portrait drawing and painting and served as a juror and board member for the Portrait Society of Canada’s International Portrait Conference in Toronto. He has also lectured at the Dahesh Museum of Art, served as a speaker at Studio Incamminati’s Advanced Portrait Workshop and Symposium, and written on technique and painting practice for several art publications across the United States.

His work can be found in public and private collections throughout the United States, and in Canada, Europe, and the Middle East.