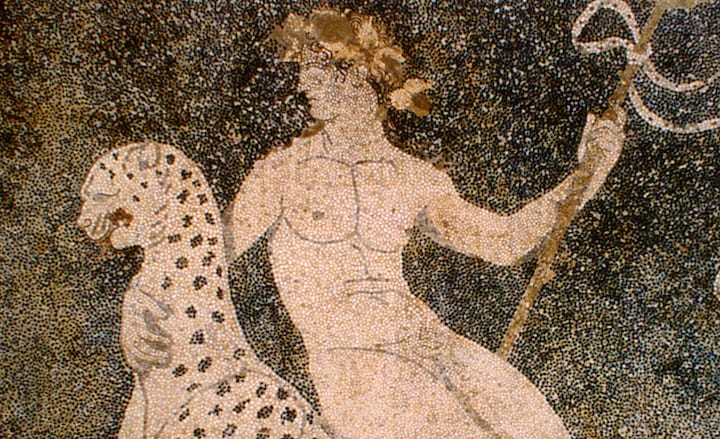 How I created a fantasy portrait of Dionysus’ Panther.

Out of the blue one day, an executive’s assistant called and, with no further explanation, inquired if I could paint a “portrait of a panther.” Intrigued, I agreed to meet with the executive. I wondered, why a panther? Was it his favorite sports team mascot? No, I discovered he was excited by Greek mythology and Jungian archetypes. He wanted a portrait of the panther that the Greek god Dionysus, the god of madness and chaos (better known as Bacchus, also the god of wine, art, and theater), would ride around on.

Excited by the challenge of creating a large painting from imagination, I connected instantly with him. It looked to be an interesting task, as I could not have a live model.

To begin, I researched hundreds of pictures of panthers and viewed numerous videos of them in zoos and in the wild. Panthers are amazing creatures and very playful. I sketched different views and various types of leopards, and then explored some narrative options.

After discussing options, we agreed upon this scenario: The animal would be coming out of a dark cave, representing the chaos at the beginning of creation, standing strong, ready to be ridden by Dionysus; the setting would be either dusk or dawn. Its mouth would be open almost seductively, licking its lips, a bit crazy looking (but not too scary since my client has three young daughters).

As I worked on a full-scale (40” x 60”) view of the panther, I decided to portray him in a full-length side view with the head turned towards the viewer (image below). He would be looking right at Dionysus, ready to create all kinds of mayhem and mischief. According to some myths, its breath was so sweet and alluring that no creature, except a dragon, could resist being drawn to it to be devoured. 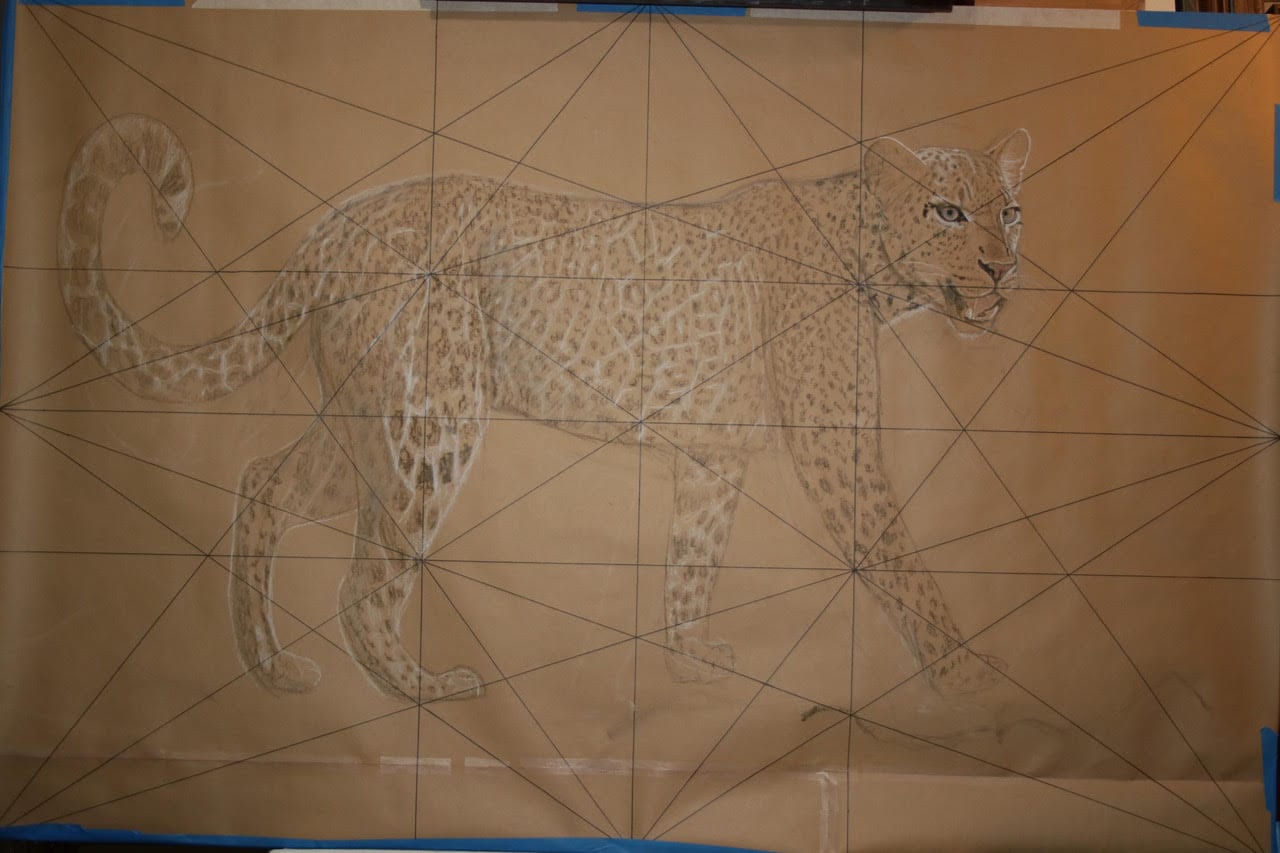 The project progressed. While I stood drawing its spots on brown wrapping paper, shaping its form, my energy waned dramatically. I began to have trouble standing to work, and had trouble breathing. A visit to a cardiologist revealed an urgent need for surgery to repair a failing heart valve. Just as I was recovering from surgery and about to complete rehabilitation, my mother fractured four vertebrae by just bending over. She was in great pain, endured surgery and rehab, and recovered enough to return to her independent living unit. She was still in much pain and, at almost 98 years old, ready to go on after a wonderfully long life. I promised that I would take care of her so that she could die where she had lived happily for almost 18 years. I slept on her couch, took care of her, and kept her out of a nursing home. Later, with the help of hospice, I had the great privilege to be with her until she passed on peacefully.

Because of these back-to-back life-changing events, and after almost 40 years of painting, I was unable to paint at all for 10 months.

During our times in waiting rooms, and the time in-between taking care of her and while she slept, I used my new iPad Pro for more research on the panther project. I learned about the amazingly bountiful plants and animals of Greece, and what grew at different altitudes. I determined from which direction and from what angle the sunlight would come. Another client saw the sketch and suggested adding some grape leaves signifying the god of wine. 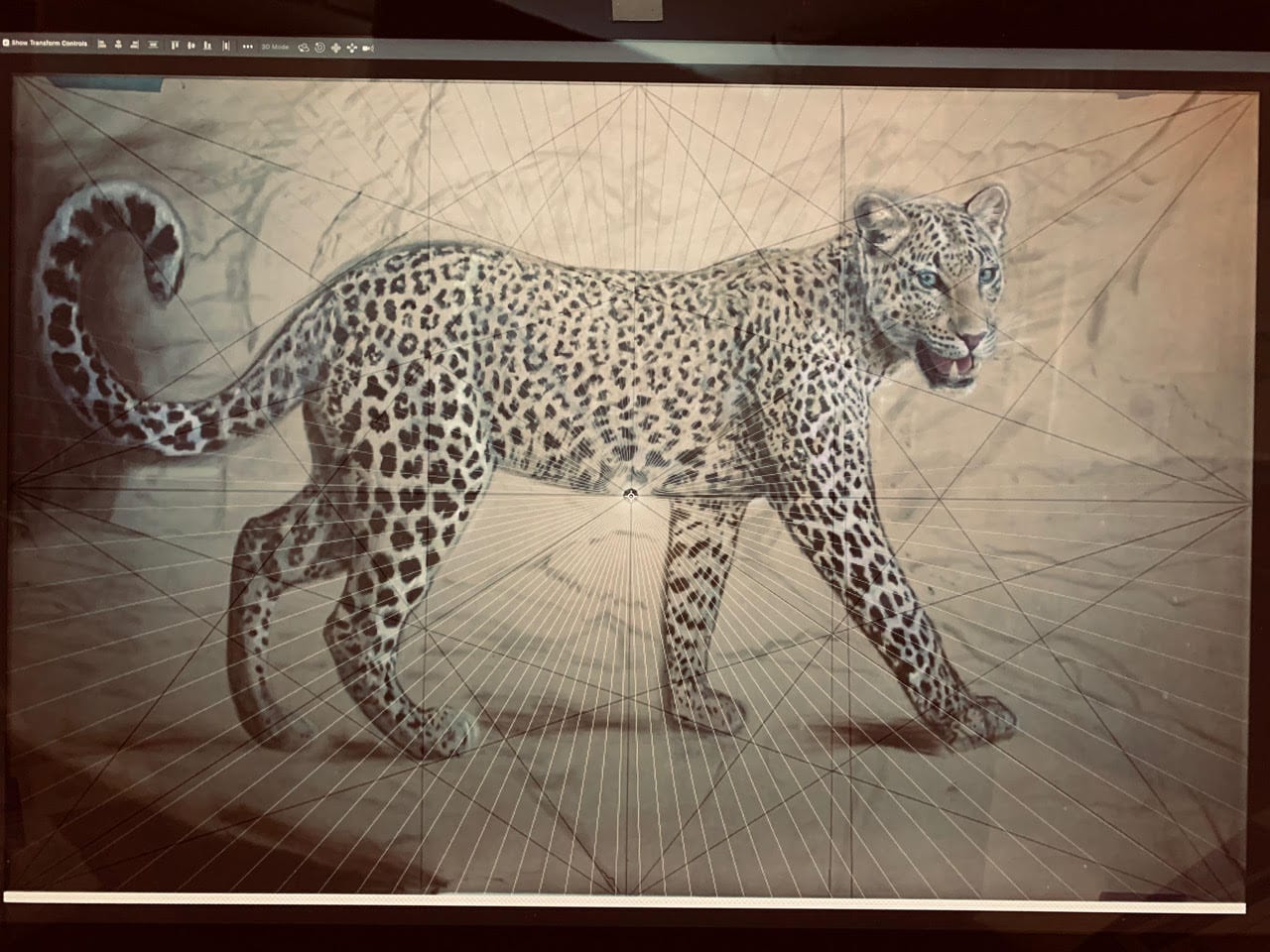 Pinterest was a very useful research tool as it allowed me to save reference images to specific categories such as caves, clouds, grapes, Greek gods, hills, landscapes at sunset or dawn, leopards, paintings of ancient Greece, rocks, skies, and trees, etc. On Instagram and YouTube, I viewed travel videos of hikers at Mt. Olympus, and 3D satellite views with Google Earth. I also started watching YouTube instructional videos by artists I admire.

I rethought my procedures, pigments, and methods.

When I was finally able to get back to my studio, I drew the panther on a custom panel and then used PanPastels to start suggesting the background. I then took a picture of the drawing, and on the computer, digitally added the lines centered on its stomach (image above, right). Attention leads to its face, but the real center is its insatiable hunger, and everything radiates out from there. Both the ears and the tail are emotionally expressive. A heart symbol is fixed on its tail, and its ears are listening for directions. The panther’s posture is relaxed, but alert and ready to spring forward.

The painting gradually evolved to support the mythical narrative. Some Magic Realism elements included were spirit faces hidden in the cloud above Mt. Olympus, the grapevine, and the rocks. Painting in layers, I tried to create the golden light at the beginning or end of day. I placed the panther just above the tree line where it could either go down into the valley or up to Mt. Olympus. The angle of the sun spotlighted its stomach, eyes, mouth, and the ripening grapes, as well as the home of the gods hidden by the cloud in the distance.

At one point, as my client was traveling in China but wanted to keep up with the progress, I made the mistake of emailing him a photo. He suggested some changes, but I advised viewing it in person before making any edits. Happily, when he finally did see the painting he was pleased, and his family loved it (final shown above).

After the long delay caused by circumstances beyond my control, actual painting time for this piece was only three months. I learned a lot from the experience of researching the topic for this commission, and was grateful for my client’s patience. I am also grateful that I was able to spend the time caring for my Mom when she needed me most, and grateful that my health was restored before the pandemic began. I am thankful to have commissions that enable me to continue working in my beautiful space here in Nashville. I look forward to seeing my artist friends in person again, but in the meantime enjoy our Zoom meetings, and the social media which at least allow for some connection. I really enjoy hearing from you all.

Mark Alan Burnett lives in Nashville, Tennessee, and you can read more about him here:
MarkAlanBurnettPortraits.com