Jamie Lee McMahan pursued dual careers for years, and didn’t decide to become a full-time artist until the age of 46. He has since painted U.S. senators, governors, mayors, judges, university presidents and more. One of his most famous subjects was Alex Haley, author of Roots. 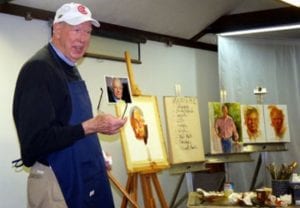 McMahan began the program by telling us about his early interest in painting and how the old Masters have influenced his work. The more he reads about them, the more he realizes the procedure hasn’t changed that much. It’s still about putting paint on canvas and seeing. He emphasized that artists are guilty of over-painting and their original stroke disappears; “Think, look, put the paint on the canvas, and leave it.”

Painting from a photo, he picked up a #16 flat brush and started a mosaic form using single marks and color. A stroke was counted each time the brush was lifted, smudged or wiped. He began with the nose and worked out from there with 1) a brushed triangle patch of color, 2) orange color between eyes, 3) brushed horizontal yellow at mouth area, 4) a burnt sienna vertical stroke applied with folded Bounty paper towel, and so on. 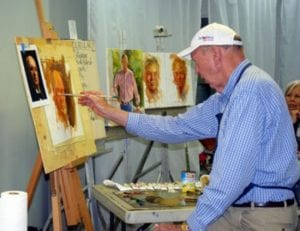 When McMahan got to the eyes, he gave us a good tip for spacing called “the Curly Method.” Stating a life-sized head is approximately 10 inches; the eyes are located midway between the top and chin edges, the distance between the pupils of the eyes is about 2 ½ inches. He held up one hand and said, “Remember the Three Stooges and Curly? Point the forefinger and pinky fingers and curl under the two middle fingers the way Curly used to poke Moe, hence the Curly Method.”

McMahan continued while the audience counted strokes. He then asked where the last strokes should go. He brushed a dot of highlight on the tip of nose, and wiped his thumb across the right forehead to lighten it. Throughout this exercise, he said to think form, not likeness.

After a short break, McMahan shared his ideas about artist co-ops and stressed the need for more study in drawing and art history. He quizzed us on three women artists: Elizabeth Shoumatoff, who painted Franklin Delano Roosevelt’s un-finished portrait; Helen Carlton, who did Scarlett O’Hara’s portrait exhibited at the Margaret Mitchell House; and Jean McClain, who painted Edith Vanderbilt’s portrait.

McMahan’s second demo, or “fun painting” was done on a canvas stained with orange, red, and yellow. He made a cross through the middle of the “face,” painted darks for eyes and light between brows, placed the left nostril, and used the “Curly Method” for top lip placement. He stressed placing strokes carefully. Developing the shadows and cutting in the background, he quickly suggested cools for turning edges. He lifted lights, and added warms on the left side, wiping with paper towel to blend edges. McMahan challenged us to do these exercises and create stronger paintings in the future. His parting words were “Put the paint on the canvas and leave it.”