At the September 2016 Portrait Society of Atlanta meeting, nationally recognized portrait artist Katherine Galbraith was introduced by Lora Hill, PSA Director over Programs. Although she resides in Pennsylvania, Katherine is a native of Memphis, TN, where her artistic studies began at an early age. Along the way she has received numerous awards and recognitions, including a full merit scholarship to the National Academy Museum School of Fine Art where she studied portraiture under Daniel Greene, and Impressionism under Robert Phillip. She has had many notable portrait clients, including President George H. W. Bush, and in 2014 was awarded a first place in the Portrait Society of America’s Members Only Competition. With such a remarkable resumé, we were excited to watch Katherine do a live demonstration as part of the meeting. 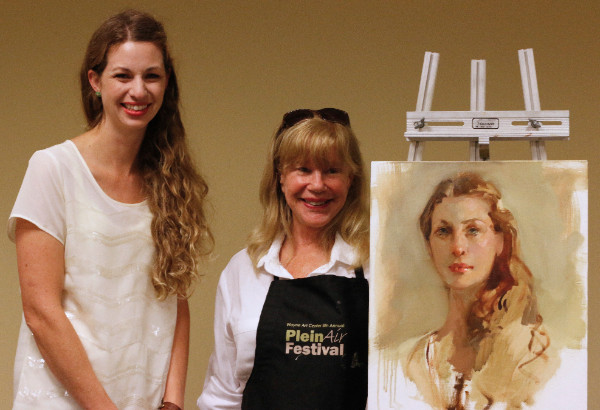 For this demonstration, Katherine used a pre-stretched oil-primed linen canvas by Odessa. In the drawing stage she uses Gamsol as a thinner, but as a painting progresses, she switches to pure linseed oil. Katherine starts with loose, flowing strokes. Working broadly with a large flat brush and thinned brown oxide, she defines shapes and anchors features while searching for the defining line (line-of-action). She talks about using cool and warm to model the form while establishing her lightest light and darkest dark.

On this particular portrait, Katherine quickly achieved luminous skin tones with beautiful warm and cool mixes. She said that she always adds red to the eyes — to be true to reality and to make them come alive. For the model this evening, character lines in the face were not an issue, but for an older sitter, Katherine includes some of the hard-won lines in the face because they define the person and their life story. In the final moments of the demonstration, she smoothly pulls out a highlight on the nose and then softens the corners of the mouth with a flick of her finger to create a more cohesive form. In a very short amount of time she has achieved a compelling and beautiful portrait of Andrea. To learn more about Katherine Galbraith’s work visit her website at https://katherinegalbraithfineart.com