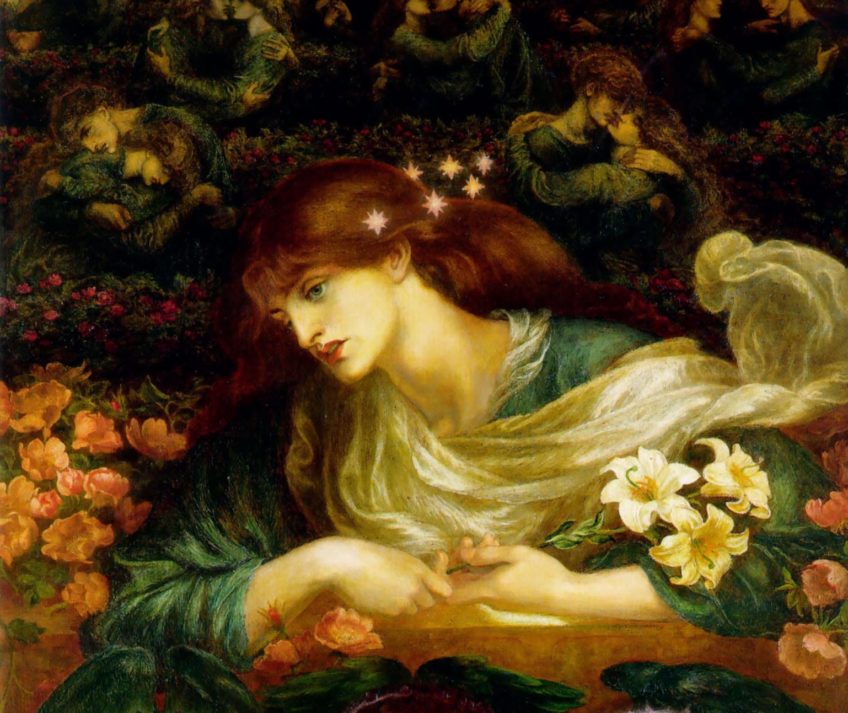 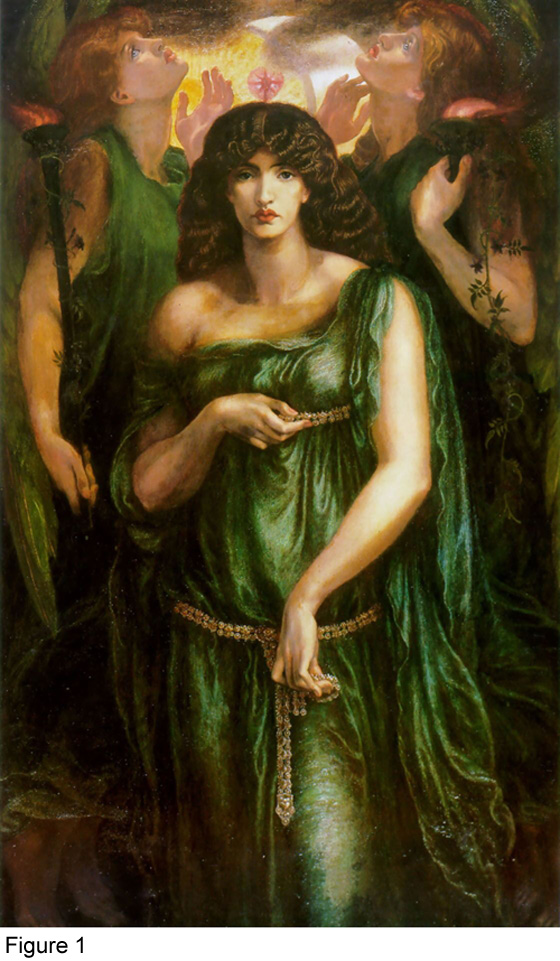 An expansive symbolism: the many portraits of women by Dante Gabriel Rossetti, the nineteenth century Pre-Raphaelite artist, are accompanied by an unexpectedly harmonious blend of disparate cultural elements, cultural codes. She may wear a simple, green silk robe of the Far East along with extravagant Roman jewelry; she may wear a Greek High Classical robe but play a medieval musical instrument; or even take the form of the Assyrian goddess of Love but with a host of Christian angels, as in Astarte Syriaca (fig. 1), a portrait of his lover Jane Morris. A commingling of East with West, modern with ancient, Christian with Pagan—even a commingling of the spiritual with the sensual. Without specific time or place.

The viewer must seek Rossetti’s message by way of the beauty, but, more importantly, beyond it. That is why Wassily Kandinsky, the pioneer of modern abstract painting, praised what he called Rossetti’s search for the “inner” by way of the “outer” (17). And that is why Rossetti’s portraits of women inspired the French Symbolists, an artistic movement of the late nineteenth century that sought to express states of mind rather than just objective reality. From the poets Verlaine and Malarme, to the composer Debussy, they honored Rossetti’s women with Symbolist poems and cantatas, based on these images. The reason for this inspiration is that Rossetti’s portrayals are not only portraits. Rossetti’s women are literally “fleshed out” visions of spiritual and emotional states. He seeks the “inner” by way of the “outer.” As such, symbolist manifestations of joy and sorrow—of spirit and of body—are visible within several of Rossetti’s portraits of women.

The main figure of Rossetti’s Blessed Damozel (fig. 2) of 1875-78 is a portrait of his model, Alexa Wilding. However, surrounding Alexa in the background are numerous portrayals of lovers embracing. These are repeated portraits of Jane Morris embracing a younger Rossetti. Jane Morris was the wife of his friend William Morris, a member of the second circle of Pre-Raphaelites and founder of the Arts and Crafts Movement in England. She was also Rossetti’s near life-long lover. The Damozel holds lilies, Christian symbol of purity and of the Virgin Mary, but surrounding her are roses, sometimes a symbol of Christ’s passion but more importantly for Rossetti, a symbol of Venus, pagan goddess of sensual love, thus using traditional symbols in a most unusual way, commingling the spiritual with the sensual, in Heaven. No wonder the Victorian novelist Charles Dickens expressed outrage. As noted in Rossetti’s accompanying poem, even the “gold bar of Heaven” upon which she leans is “warmed” by “her bosom.” 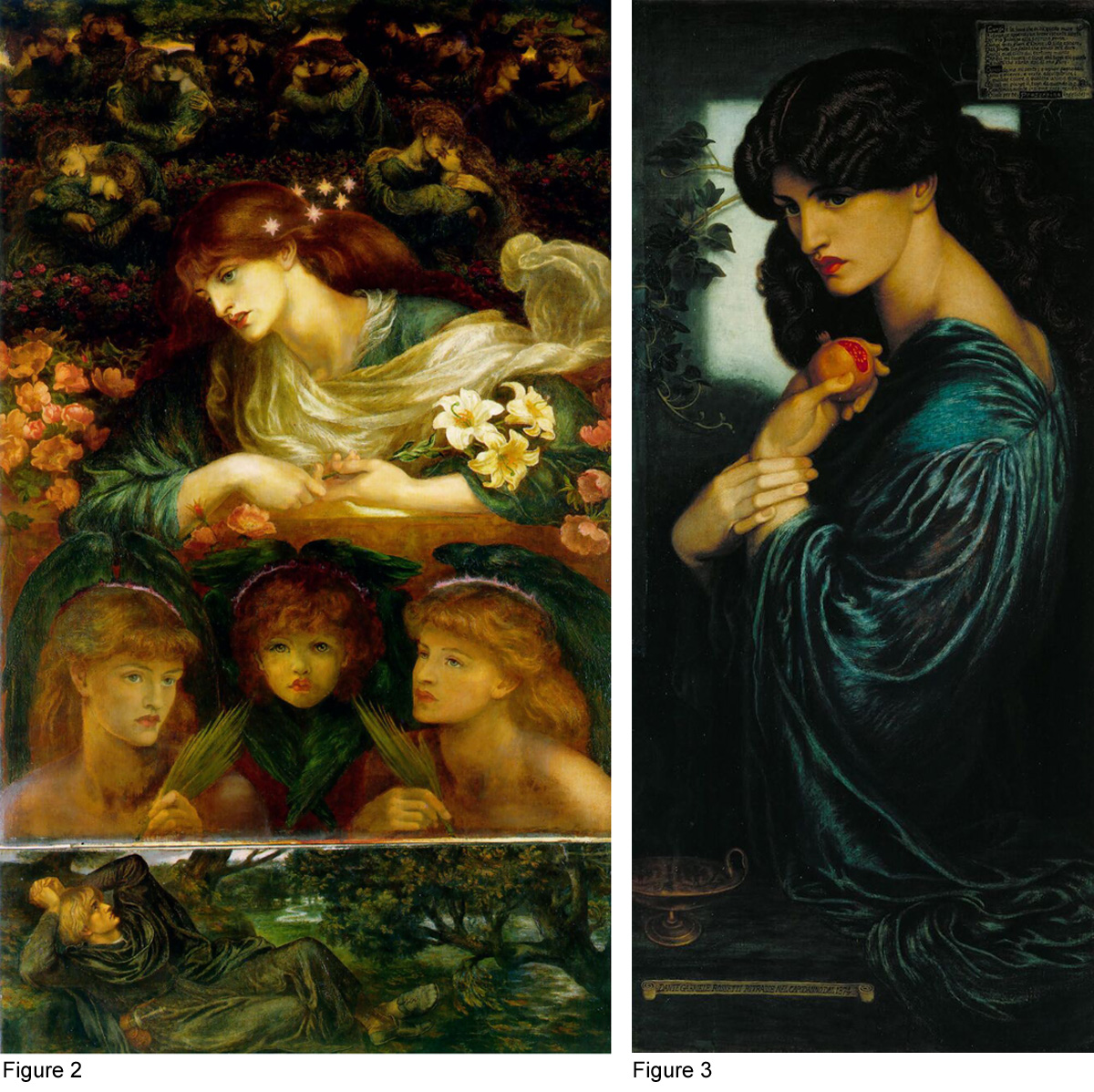 Further, unlike in most Victorian paintings, nothing happens here. As Rossetti’s poem states, the Blessed Damozel waits for her earthly lover to join her at the “gold bar of Heaven”, and she waits in vain. As I noted, in the painting, she is surrounded by embracing lovers. In Claude Debussy’s musical interpretation of Rossetti’s work, his cantata of the same name, the Blessed Damozel is accompanied by a chanting chorus.  The meaning lies not in the narrative but in the tension between the heavenly joy that surrounds her, with her own deep sorrow. She epitomizes sorrow, though she dwells in Paradise. And this absence of narrative line or “plot” suited Debussy’s Symbolist “impressionism” well. It suited the Symbolists in general, well.  Whether in music or in poetry, the Symbolists wished to evoke the internal world of feeling and spirit rather than play upon a narrative line. They sought what they called “the inarticulate hour.”  In Rossetti’s symbolist female images, they found strong inspiration. That is also why the poet William Butler Yeats listed “Mallarme and Verlaine, as well as Villiers and Maeterlinck, as participants in a movement he traced back to” Rossetti and the Pre-Raphaelites.” Yeats goes so far as to declare that Rossetti and his followers, along with the later French and German Symbolists, were “the symbolical movement…come to perfection” (Wilson 22-3).

Another coldly beautiful icon of sorrow is Rossetti’s Proserpine of 1874 (fig. 3), another portrait of Jane Morris. According to classical myth, Proserpine, daughter of Ceres, was kidnapped by Hades, Emperor of Hades, and dragged off to Hell to serve as his Empress. In the painting, however, there is no action, no plot—just a glimmer of light that intensifies the sorrow of the Empress of Hell by reminding her of her separation, once again, from those she loves. Also, the sprig of English ivy next to her forehead is, among other things, a traditional symbol of clinging memory, especially in regard to loved ones. Both Proserpine and the Blessed Damozel are imprisoned, whether by the Gold Bar of Heaven or by the Gates of Hell, and they are separated from the love that would give them joy. It is of course no accident that the model for Proserpine, imprisoned within a loveless marriage with Pluto, was Jane Morris, whom Rossetti loved, but who also was imprisoned within a loveless marriage. 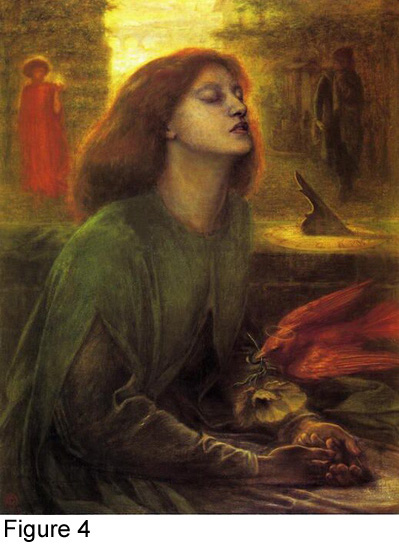 The theme of lovers separated by death is found repeatedly in Rossetti’s art and poetry. Before Jane Morris, there was Elizabeth Siddal, Rossetti’s first great love, and, briefly, his wife, as well as the subject of countless portraits. Miss Siddal died shortly after marrying Rossetti. Her death so profoundly upset the artist that he placed the only copies of his poetic oeuvre into the coffin with his dead wife (although years later William Morris talked him into digging them back up). Two years after Elizabeth’s death in 1864 from an overdose of Laudanum, Rossetti finished one of his most mystical works. This was the hauntingly ethereal Beata Beatrix (fig. 4), in which he compares his wife to Beatrice, whom his namesake Dante Alighieri loved.

Dante Alighieri was the medieval poet and author of The Divine Comedy, among other works. The Divine Comedy follows Dante on a journey through purgatory, hell, and heaven, in search of Beatrice after her death. This portrait was begun shortly before Elizabeth’s death, so Rossetti’s comparison of Elizabeth to Beatrice in the painting is as ironic as it is macabre. Rossetti regarded the painting as a memorial to Elizabeth, and he would always associate it with her death. In a letter to the Hon. Mrs. Cowper-Temple, Rossetti explained that “it is not at all intended to represent Death…but to render it under the resemblance of a trance, in which Beatrice seated at the balcony over-looking the City is suddenly rapt from Earth to Heaven.” A red bird, messenger of death, is shown dropping a poppy between the hands of Beatrice. It is true that the poppy is a symbol of death; but it should also be remembered that Elizabeth Siddal died from an overdose of Laudanum, which comes from opium. Whether the overdose was intentional or accidental, no one could say.

Dante Gabriel Rossetti’s portrayals of women are more than simple portraits. They are coolly beautiful icons, Rossetti’s “fleshed out” visions of spirit and of emotion. They stare out, beyond time, place, or symbol, and he would say that they redeemed him–in Joy and in Sorrow—through their Love.